[collection introduction]: there are five elements in the sky, five grains in the earth, and five receptions and five discharges for people. There are five elements in the sky, which are gold, wood, water, fire and earth; the earth has five grains, which are hanging, horn, rolling, ear and burying; people have five receptions, which are sucking, eating, seeing, listening and smelling; the human body has five discharges, which are urine, excrement, sweat, essence and breath. The body's five sustenances are mainly food, the five catharsis of the human body are based on the essence, and the five behaviors are in charge of the four seasons. They abide by the objective laws of nature to carry out social activities. People eat grains, they are born of them, they are raised by grains, and they are food for survival. 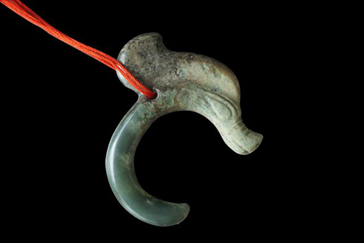 According to the principle of yin and Yang and five elements, ancient people advanced from the original shape of Jue shaped jade pig dragon to create and evolve a C-shaped Dragon (hook shaped dragon). It is a combination of yin and Yang. The head and upper body of the Dragon live on food, representing survival, while the lower body is mainly for discharge. The tail of the dragon is like the genitalia of a boar, representing reproductive life. Therefore, the C-shaped dragon is an abstract deformation of the whole body of a pig. The shape of the C-shaped dragon is that the head and tail are connected with each other, and the back is arched and the body is hooked. Just like a wild boar, the head is the brain, and the tail is the end of the spine. According to the rude words of the common people, the tail is the pig Fangzi, the pump of blood inheritance.

The body shape of a C-shaped dragon has nothing to do with snakes. Pigs are omnivorous animals that eat all kinds of grass, and can also eat poisonous snakes. Therefore, the stomach of pigs is a kind of Chinese herbal medicine PI Xiang. The black pouch Xiang pig in western Liaoning has strong disease resistance and is easy to feed. Its meat is half street fragrance. From the perspective of biological chain, pigs can not be combined with snakes, and it is not in line with natural laws. Some people say that the head image of C-shaped dragon is very similar to the head of a horse. However, after investigation, it is not the head of a horse, donkey or bear, because the mouth and nose lip of large herbivores such as horse and donkey are R-shaped, that is, round, and the front of nose lip does not tilt upward. Therefore, it is not the horse's head or the donkey's head. Only when the pig's mouth and nose and lip are raised upward and forward, can pigs use the functional habit of arched mouth in large omnivorous animals. 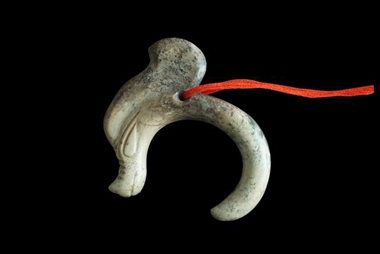 Let's study what animal's head image is imitated by the reticular pattern on the C-shaped dragon's head. Compared with the wrinkles on the head of the boar, it is very similar. It should be abstractly evolved and carved from the wrinkles of the pig's head. The mane on the back of the C-shaped dragon evolved from the bristles on the back of the sun black boar. Through a large number of facts, it has been proved that pigs are the whole body of C-shaped dragons Part of the incarnation. And pigs are also a collection of five elements. Piglets give birth to "gold", pigs eat grass "wood", pigs can swim "water", pork red "fire", pigs will arch "soil". Yuzhulong and C-shaped dragons unearthed from Chifeng area of Inner Mongolia, northern Hebei Province and Western Liaoning Province are all female parent of the sun black boar in western Liaoning more than 5000 years ago, and then evolved into Hebao Xiang pig, old man pig and civilian pig. In conclusion, yuzhulong and C-shaped dragon are the products of the combination of heaven and earth Yin and Yang with jade as the carrier, symbolizing the endless life of human beings. Jade is the spirit of heaven and earth, jade is the beautiful stone of mountains and rivers. Therefore, the traditional culture of the Chinese nation is jade culture, which determines China. 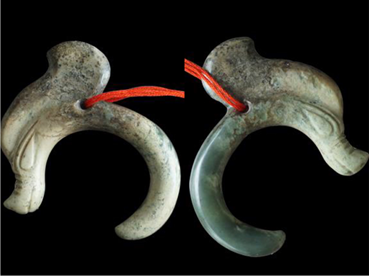 Jade dragon is one of the typical tools of Hongshan culture. It is the dragon of prehistoric culture and the representative of theocracy, kingship and religion. The collection has excellent materials, delicate and warm jade, concise and accurate pattern processing, natural and simple color, full and rich tension. The overall style presents the basic characteristics of Hongshan Culture jade ware in the same period. Hongshan Culture jade dragon, also known as C-shaped dragon, is a typical jade ware of Hongshan culture. Chinese civilization takes dragon as its totem, which is the earliest prototype and carrier of dragon totem. Tremolite jade is made of secondary crystal It is clear, brown and natural. It has the confusion of antiquity and maturity. The traces of ancient works are obvious. There are traces of ancient use in drilling and the whole. The shape is simple and simple. The coating is glossy. The leather shell opens the door secondary. The ring hole in the center is smooth. There is a small hole on the back that can be tied by a rope. The overall style presents the basic characteristics of Hongshan Culture jade ware of the same period. The collection has profound humanistic connotation, and has excellent historical research value and market economic value. It is a rare collection! 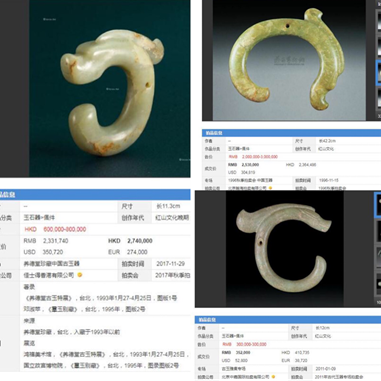